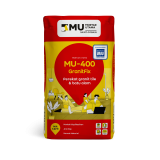 Strong adhesive for Non Porous Tile (granite tile) or natural stone, suitable for floor and wall. With base elements of cement, silica sand, filler and additive